My friend, C, and I went to Disneyland this past weekend.  We both work in Computer Science.  Me as a Software Engineer, focusing on Web, and her as DevOps, more network-y.  We had a great time riding all the various rides, and taking pictures with lots of characters.  (We were particularly excited to see the Avengers in Tomorrowland.)  At certain points though, we started analyzing and dissecting some of the aspects of Disneyland.

On Grizzly River Run, the ride where you get in a giant inner-tube with 8 people and ride the rapids (its a great ride to cool off on a hot day), I was admiring the tube return system.  The inner-tubes are, as one would expect, a big black rubber tire like thing that are entirely round with 4 seats, an exit, 4 more seats, and another exit lining the tube.  I was impressed watching the tube return system, which catch the tubes in a system of gears and pulleys that spun them around until the same entrance they loaded into was facing the dock.  How were they able to know when the entrance was pointing the right way? 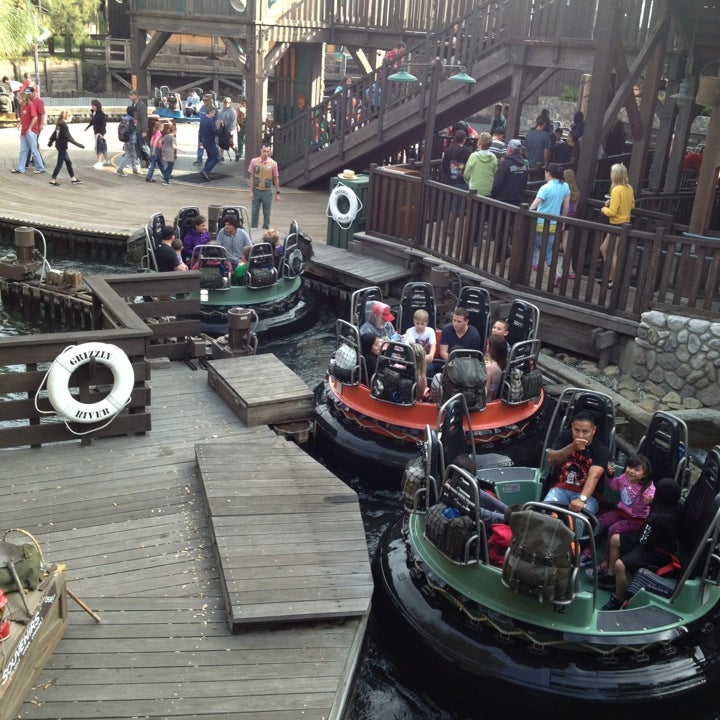 C was speculating that there were grooves in the tube that the gears spinning it around were catching and ‘reading’.   Well, that didn’t seem likely, as the tubes were perfectly smooth along the sides, and the gear teeth were all uniform.

I started speculating that there must be a mechanism underneath that was locking into a key or groove on the bottom of the raft, and when it was pointed the correct direction, detached and stopped the rotation.  But, that also didn’t seem likely, as the rafts weren’t moving up or down which you would expect if something were “locking on” underneath.

Finally, after watching this process be repeated for 10 mins (we were standing in line for the ride, ample time to speculate) we realized that next to each exit there was a big white reflector on the right side.  I began speculating that there must be something “reading” that white reflector, and using it for judgement of when to stop spinning.  Sure enough, when we got closer, we were able to see cameras or some other type of sensor, that we guessed must be the “readers” of the white reflector.

Similarly, after we rode Ariel’s Undersea Adventure, C began commenting on the animatronics in the ride, and how she was impressed with the materials they chose around the joints, as they were able to take the compression and decompression of movement really well.

And finally, while watching World of Color, she noticed that the light up Mickey ears were in sync with the water and color show!  (We read online later that you can buy these ears that sync with the show and do other special things in certain areas of the park, like go dark on dark rides, etc.)  Since she’s the network guru, she began wondering what protocol the ears were using to receive, how they could receive packets of information that had both color and duration values that were reflected by the ears.  We talked about it for a good 10 minutes, not all of it could I repeat to you, since my network lingo is spotty.  (Reading online, we found out they used infrared.  Pretty nifty)

Anyway, we both have had a great time in the parks.  It amuses me that, now that we’re “adults” and more highly educated, that we can have discussions about how the rides and attractions work.  It also made me realize how friggin awesome it would be to work for Disney as an imagineer and construct new shows, rides, features for the parks….. Drool…..